Breast cancer and HRT – what you need to know

When making a decision about whether HRT is right for them, an increased risk of breast cancer is often top of a woman’s list of concerns. This is a relatively common cancer that affects 1 in 7 women throughout their lifetime. The good news is that survival rates have doubled in the last 40 years.

Read on for an evidence-led look at whether HRT increases our risk of breast cancer. We also explain whether it’s safe to take for women with a history of breast cancer in their family. Plus, we explore why some women choose to take HRT after, and even during, their treatment for breast cancer.

HRT stands for Hormone Replacement Therapy. This is the gold-standard treatment for relieving the symptoms of the menopause. It replaces the ‘missing’ hormones that begin to decline during mid-life. The average age of menopause in the UK is 51, but women are likely to experience symptoms in their 40s (even though their periods haven’t stopped) during what is known as the perimenopause.

By topping up our hormones, HRT can improve our short term wellbeing (by banishing hot flushes and stabilising mood). It also reduces our risk of many chronic diseases in later life.

Does HRT increase my risk of breast cancer?

For the vast majority of women, the benefits of taking HRT outweigh any risks. These risks depend on the type of HRT we choose to take, as well as other factors including our age, lifestyle and general health.

Many women worry about breast cancer when deciding whether or not to take HRT. It’s important to remember that most types of HRT don’t actually increase our risk of the disease. Some studies show that women taking combined HRT (including both estrogen and progesterone) may be associated with a very small increased risk of breast cancer. What’s more, the increased risk is actually lower than the risk associated with drinking a couple of glasses of wine a night or from being overweight. You can see the associated risks explained clearly in this graphic from Women’s Health Concern.

No studies have shown that any type of HRT increases the risk of a woman’s death from breast cancer. For those taking estrogen-only HRT, there is actually a small reduction in breast cancer risk.

There is also no increased risk of breast cancer in women who take any type of HRT when they are under the age of 51.

So, where has this concern come from?

In 2002, the prescribing of HRT stopped virtually overnight. This was thanks to media reporting of a study conducted by the American Women’s Health Initiative. The researchers had published a report claiming that HRT increases the risk of breast cancer, CHD,  stroke and dementia. The tabloid press went into overdrive and millions of women around the world and their GPs panicked.

This study has now been debunked. Its influence still lingers to this day despite many authors of the study publicly apologising for the impact it has had on women’s health.

There were three key things wrong with the study:

Even with these three significantly skewed risk factors, the studies actually concluded only a small, non-significant increased risk of breast cancer.

To learn more about the WHI study and what went wrong, this lecture from Professor James Simon is an excellent resource.

GPs in the UK should now be up-to-date with the risks and benefits of HRT as the NICE guidelines have been fully reviewed and updated.

Should I take HRT if I have a family history of breast cancer?

Many women have a family history of breast cancer as it’s a relatively common disease. It’s important to consider, however, that  just 10% of these breast cancers have a genetic or familial cause.

Those with a family of history of breast cancer should discuss any plans to start taking HRT with a GP (preferably one with an interest in menopause care).

There’s no strong evidence that a familial history of the disease puts women at a higher risk if they take HRT when compared with women with no family history of the disease. In fact, there is some evidence that women taking HRT have a lower risk of breast cancer when compared to women not taking HRT. This means that most women (including those with the BRCA gene) can still take HRT safely.

Taking regular exercise, maintaining a healthy weight, not smoking and limiting alcohol intake can also lower our risk of breast cancer if we’re worried about our family history.

Can I take HRT during or after breast cancer treatment?

If you’ve had breast cancer, you may have been told that HRT is too risky.

The lowest risk form of HRT for women who have had breast cancer or are currently undergoing treatment is local vaginal estrogen. This is used to treat menopausal symptoms that affect the vagina (such as dryness, pain and recurring infections). The estrogen only reaches the surrounding tissues and doesn’t get into the bloodstream. There is no evidence to suggest this type of HRT increases a women’s risk of cancer recurrence. Healthcare professionals can usually safely prescribe this to women with active breast cancer, including ER-positive breast cancers.

Most doctors who specialise in the menopause agree that if you’ve had an ER-negative breast cancer, taking HRT doesn’t increase your risk of a recurrence further than women who haven’t had breast cancer. This means if you’re over the age of 51, there is a small increased risk. This is less than the risk of drinking a couple of glasses of wine a night, or from being overweight.

The evidence around ER-positive breast cancer is less clear. Many women (including BBC broadcaster Kirsty Lang) choose to take HRT because they have weighed up the risks and have decided that their menopausal symptoms are too debilitating to be left untreated. These women often also weigh up the benefits HRT can offer to their health. This includes a reduced risk of CHD, dementia and osteoporosis.

Friday Five: A look at the National Food Strategy, with Dr Zoë Harcombe

In this week's episode of the Friday Five, Liz chats with Dr Zoë Harcombe about what the National Food Strategy really means. Aubergine ricotta and spinach rolls in a tomato sauce recipe

Enjoy a light twist on a classic dish with our recipe for spinach and ricotta rolls - swapping heavy pasta for lighter aubergine. 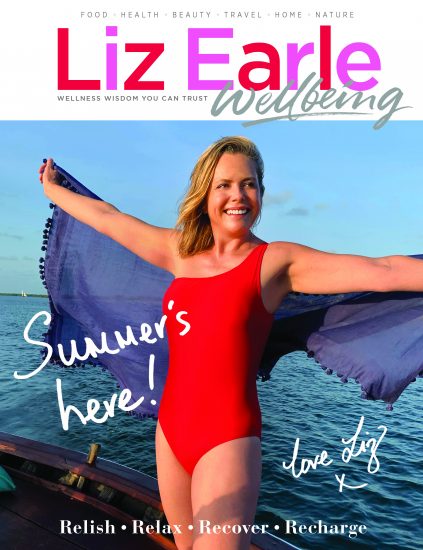